This is my second time waking up this morning.  The first time was just before 2am when I was awoken to yelling outside of One Love and the sound of a car alarm.  The car alarm was Brad's car which is parked outside of my trailer.  The yelling was the manager of the park tell me to "Turn that car alarm off and do not turn it back on".  Well the keys don't have a car alarm control on them and I never set any alarm so I am not sure why or how the alarm went off.  I don't think I was all that successful in explaining that to him after being woke up the loud alarm he wasn't all to happy and I can't say as I blame him.

I am reading a new book called "The Shack".  Wow, what a powerful book, I can see why all the hype over this book.  I am right in the middle of it where he returns to the shack 3.5 years after his daughter was murdered there after being kidnapped by evil on a family camping trip.  I don't want to ruin it for any of you out there who haven't read it by saying to much so I won't give away all the goods.  The main character "Mack" had a bad childhood.  Many of us can relate to that I am sure.  I know I can and like Mack I spent most of my life holding all that in pretending it didn't affect me.

I didn't want to be one of those people who walked around complaining about their poor childhood all the time.  I always felt compassion for others and wanted to help them when I heard about their pains of past and present.  Yet, for some reason I didn't consider myself worth the same compassion and love, I thought myself weak if I broke down and reached out.

It wasn't until my own childhood abuse was rudely brought to the surface when I fell victim to a violent crime a couple of years ago.  All the bad memories that I believed were cleverly locked away to deep to ever be discovered.  My sleeping volcano of emotions awoken to pains ignored to long boiled with a vengeance as all the painful memories exploded through the surface with a force guaranteed to pay them their due attention.  Vividly painful images poured out of me like hot lava burning my flesh as it oozed down the rolling hills of my soul feeling determined to make me relive each horror as if no time had passed.  No where to run this time the lava swept me away taking me on a downward spiral of emotional turmoil that lasted over a year and a half leading me to the place where this journey had begun or so I thought.

The truth is this journey began the day I was born.  I came here to learn like we all do.  Determined from birth to do all things the hard way it wasn't until the the day Stella was conceived, the day I said the great prayer that I began to learn my ultimate lesson in life, unconditional self love.  The first real prayer I had ever spoke, my first plea with God for a New Path set me on a lonely course of self forgiveness leading me to a place so raw and exposed only one answer remained to keep me alive a moment longer, the answer was love.  Unconditional love of self and all others was the answer to my reason for being here from that day forward.

Facing my own demons of past, paying them their due respect was all that was needed.  After realizing that I wonder why I had to wait so long to do so.  Why we avoid our worst pains thinking they will disappear yet they never do when left ignored.  We avoid emotions like pain and anger thinking we need to keep on trucking for this or that reason.  Conditioned to believe we are supposed to have it all together even when we don't.  "Never let em see you sweat" and cliches like that become the tools we use to bury the things that we most need to let run their course so we can grow and learn from their affect on us emotionally.

How I spent my life nurturing others without once nurturing myself I do not know.  I could understand others pain yet denied my own until the past two years.  And I have to say I feel sorry for a lot of my friends over the past couple of years.  I was a wreck most days, haha. Truth is I wasn't happy about self's decision to be a wreck and fought it.  Tried to pull it back together by attempting to stuff it all again, except this time that wasn't working out so well.

Today being strong has an entirely new meaning to me.  I recognize that part of being strong is allowing myself moments of weakness.  Allowing self to express fear, sadness, regret and above all forgiving self for all the times I didn't allow her those liberties.  Self deserved a chance to heal from past pains and regrets.  How did I think that could happen by burring those feelings alive.

A friend asked me once a couple of years ago...

"JoJo, how do you feel when you help others?"

"Well, I feel good of course!"

"So then why do you not want us to feel good for being allowed to help you?"

At the time I was very moved by my friends words and thought long on them only to continue the same behavior of not allowing self to ever be weak.  What happened is self was growing weaker and weaker from carrying all that crap around for so long and wanted a break from the heavy load.  She found a way to let it all out, repeatedly till she was heard.

Denial is an amazing thing.  The longer we practice it the more we believe our own lies to self.  I believed my self not worthy of much and she accepted that belief easily.  Turning my relationship with self into one built on unconditional love is not as simple some days then others it seems as simple as a choice to do so.  On the tough days maintaining that feeling of self love requires me to push self , or self pushes me.  I'm not really sure who is doing the pushing around here but I am glad one of us is.

Some days we need a good push and the past few have felt that way to me.  I have been a little down.  I think my Birthday approaching is part of it.  I spent the last two alone crying.  The last one everyone assumed I had other plans already. Haha, that's kind of funny looking back.

I cheered up a bit today after remembering that Kirsten and a long time friend of ours Tracey were coming to say hi on their way to pick up Kirsten's daughter who was visiting family not far from here. 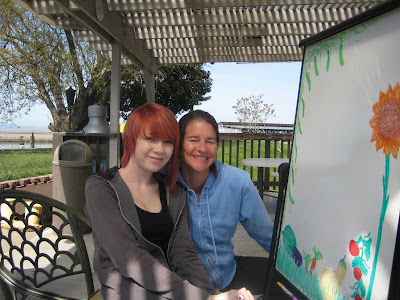 I got ready for the day, decided to spruce up a little and headed up to the General Store fully intent on cheating on my diet and buying a RockStar, I'd love to say I changed my mind last minute but I didn't and I'd love to say I didn't even like the RockStar but I totally did.  I am not going to beat self up over it thought.  I have been so good sitting down here eating seaweed snacks and kale, lol.

Super lucky to find Adrian working and her daughter hanging out whom I met for the first time.  Her daughter is amazing, and quite an artist.  She was putting together an announcement for the park of a new organic garden being put in the east corner of the park soon.  How exciting.  I had a lot of fun hanging out with everyone at the store till Kirsten and Tracey arrived.

Then we headed down to One Love  Everyone loved Kirsten and Tracey and they loved everyone!  We had a great afternoon laughing and having fun while investigating my pictures that appear to have some sort of orbs in them.  I had orbs appear in some of the pictures I took at my Sisters house over last weekend also.  We were unsure if it was my camera but figured it couldn't bee seeing how the orbs show up in different corners of the photos and not in all of them only some.

Last night I tried to take some pictures of the Moon Rise but didn't think I got them as it came out to dark and the moon just showed as a little red dot.  Upon looking at them I found one with these orbs in it.

I am not sure but think it is kind of cool if they are orbs, call me silly but it makes me feel kind of comforted to think I have orbs hanging around.  I know most people would be kind of scared but I don't feel that way at all, the opposite in fact.


Before going in last night I was visited by an Owl while Jim and Glen were outside of One Love with me.  Pretty cool to see.  This morning after watching the sun rise I turned back toward One Love and Saw this heart shaped Owl looking face in the tree across from me and began to weep.  Not really sure why I cried, but knew I must have needed to for some reason so just let it happen.


The girls just left and now I am going to lay down and enjoy the afternoon breeze while reading some more of my book. I am missing them already.  Feeling sad still and okay with it.  I think a nice relaxing afternoon of just being will be okay.


I hope you all have a most blessed day of laughter and lots of unconditional love!

Pin It
Posted by Lelania Marie at 4:33 PM

Email ThisBlogThis!Share to TwitterShare to FacebookShare to Pinterest
Labels: Family and Friends, Love Conquers Fear, Time With Self