Is putting kids on a meal replacement diet the right thing to do?

Is promoting diet products to kids as a way to earn a living the right thing to do?

This is a good question to ask ourselves before mindlessly following the leaders!

Since leaving ViSalus, my former company I have shared publicly why and moved on to keeping my focus on the positive path of returning to my original desire to learn how to live organic.  When I set out on this journey I began educating myself on what artificial ingredients are, what additives, preservatives and processed foods are and how they effect our health and cause diseases and health effects.

Over the past three months since leaving and sharing my own reasons more and more people have come forward with their own reasons for leaving ViSalus, all whom like me were all in and promoted that product as a life style believing all the hype we were fed by the leaders in ViSalus and millions spent on advertising marketing of the ViSalus products being a healthy alternative to bad eating.

Since leaving ViSalus I have also learned that people reporting health side effects from using the products not new news, people have been leaving and reporting their concerns over the products to ViSalus for a few years now and nothing has changed in the products.

ViSalus has not only ignored addressing the hundreds who have had health side effects that they believe are associated with the products they consumed.  Rather than address those issues and/or changing some of the ingredients in their products they have now launched a new campaign spending more money on advertising and giving away free products.  This time to children with the new Project 10 Kids where every adult who loses 10 pounds can earn a free bag of the ViSalus meal replacement shake for a child who is overweight.

When did we as a society become okay with promoting a diet product to children?  This is where we should draw the line, ViSalus should draw the line.  Meal replacement shakes for children who are over weight as an attempt to say we care is careless and harmful at best in my opinion.  If ViSalus, if we care about children and the epidemic of obesity they are now a large part of we should promote better healthy eating to children.  If ViSalus wants to honestly help children improve their health than why not take some of the billions they have made and launch a campaign that does not boost sales for more profit.  A campaign that promotes a long term goals for helping fight the epidemic of childhood obesity. 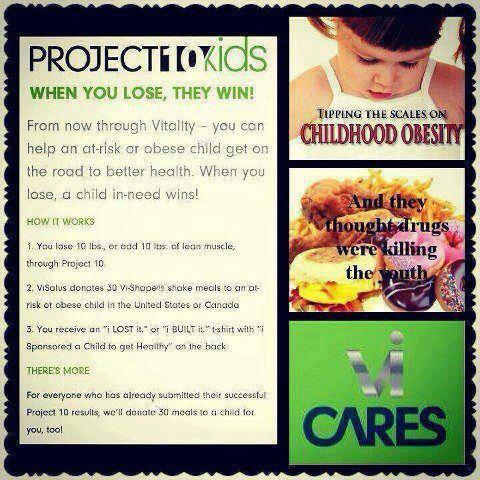 Meal replacement shakes are a temporary solution to weight loss, we can't spend our lives on meal replacement shakes and certainly should not teach our children to replace education on long term healthy eating with diet products.  The ViSalus shake contains controversial ingredients like soy, Sucralose and while the company makes claims of the product containing NON-GMO Soy it never has claimed the product itself to be GMO free.  Not to mention MSG's with new names.

Recently co founder Nick Sarnicola told promoters during a training event that drinking the ViSalus shake is no worse than drinking Gatorade and implied that anyone who questions the safety of the product is stupid.

Why would someone confident in the safety of their product use insulting and manipulating peer pressure to get promoters riled up at others raising honest concerns by implying that even considering it would make them stupid?  To my understanding he never addressed any concern for any of the hundreds who have come forward with health problems they developed during using the shake and believe to be associated with the product.  If Nick Sarnicola's true intent is to help fight obesity for health than why wouldn't he address these concerns with honest concern rather than promoting questioning the ingredients equates to being stupid.  Why isn't ViSalus addressing these concerns?

My own daughters when resigning from ViSalus were asked why they were leaving and when they explained their reasons were over the ingredients in the shake and migraine head aches they were told by ViSalus staff that they didn't have to use the product to promote it.  That only confirmed their decision to resign as promoters of ViSalus.

Now I have and am focused on my return to a positive path, however this new publicity attempt disguised as helping children is where we should all really questions the true motives of ViSalus and ourselves in jumping on board in promoting a diet product to children.  Are we really that brain washed that we think it is okay to teach children to use diet supplements in place of healthy eating.

My intent in writing this article is to raise awareness for the sake of the kids whose parents are uneducated in the health risks associated with using diet products and hopefully to reach out to those who are on board with this type of marketing.  It is one thing to promote anything to adults who can make decisions for themselves but kids listen to what their parents tell them and eat what their parents feed them.

I believe that any parent truly wants their children to be healthy and if they considered both sides to the arguments for and against diet products for kids before solely trusting the advice of those selling the diet products they would choose to do the work to educate themselves and their children on healthy eating as a solution to obesity.

While obesity is an epidemic, losing weight at any cost is not a message we should be sending children.  Total health is what we should be promoting to children, in doing that we eliminate obesity which is a side effect of bad eating.

The health issues associated with obesity are enough without adding to the potential of more health issues with meal replacement shakes of any kind.  Children are growing and need full nutrition gained from real foods.  Developing healthy eating habits with fruits, vegetables and a well balanced diet is the answer to fight the war on obesity in children not giving them free bags of a meal replacement diet shake.

This is taking promoting to far and anyone promoting ANY DIET PRODUCT should really question their own motives when they start promoting to children.  We all love our children and I believe that we have a responsibility to fully educate ourselves on every aspect of what we feed our kids more so than what we feed ourselves.

I was on that train, I believed that ViSalus feeding homeless children was charitable, my own family and my grown kids drank those products so trust me when I say I am not judging anyone.  I learned that many people who used to also promote ViSalus and believed in it with all their heart like I did were having health issues they believe were related to the products.  Now I am no doctor and do not know for sure weather or not those health problems are in fact a result of the products but I do know this...

Enough people have reported having health problems while on the ViSalus products that we should draw the line in promoting these products to children without knowing for sure they are fully safe. Even if  you take away all of the stories of health effects it is irresponsible to promote diet products to children in place of healthy eating.

At the very least we should consider the simple truth that we can't live our lives drinking shakes and at some point need to learn to eat real healthy foods to maintain weight loss, why not teach our children to lose weight with a healthy diet change.  There is no argument against healthy eating.  Why take a chance with our children with all the information on "POSSIBLE" side effects of using any meal replacements or diet products.

I love you all from a place of caring about the children in this issues and wishing for everyone involved to consider them first over anything else in this whole situation.  I fully support us all walking out own path and making our own choices.  In the matter of making choices for children comes the responsibility of making educated informed choices that are hopefully based on much more than opinion.  If you honestly believe it is okay to promote diet products to children ask yourself where you gained that belief, did you research this or are you taking the word of a company who profits off of your beliefs.

Email ThisBlogThis!Share to TwitterShare to FacebookShare to Pinterest
Labels: Health and Wellness