While I sat in my back yard, eyes closed with tears streaming down my face, seeing all that I was being shown and said the words out loud, all the birds began to yell out loud, and I mean all of them, it was surreal, all the different breeds of birds began to sing loudly in chaotic harmony as I said out loud... I HAVE KILLED!!! Like a symphony they said to me, keep going, you are on to something important here. And so I did not turn away from the feelings, from what I was being shown, I kept going.

I was shown the murders I, myself have committed. The times in my life when I killed or took place in the taking of life that is precious, Life that is creation. Life that comes from the same creative force I, myself come from. And as I went deeper I was shown my reasons. I have killed spiders out of fear, I have killed ants out of annoyance. I have killed animals who live in suffering, and are murdered in merciless fashions by eating them after they are packed up pretty for me at the grocery store. I have even killed a loved pet to put him out of his misery in the middle of the night as his body contorted and he gasped for his last breathes of air in immense pain from full kidney failure. It was there that I saw my reason that struck me deeply. Killing Beau was so hard to do, I didn't know if I could do it, but letting him suffer until the morning when I had a way to take him to someone else to do the deed for me would have been harder, would have been cruel. With tears and pain, I prayed for courage to end his suffering and so I did.

In seeing my reasons for the killing I, myself have committed I began to see the suffering of the hearts that kill humans. The tortured hearts who have so often seen so much murder themselves, so much pain, too much for most to bear, more than I have ever known. I saw how infectious hate is. I saw through my own heart, my own pain, and recognized my own disrespect for life and reasons to justify taking part in dismissing the value of life, all life in every insect I killed, every animal I ate with no regard for the life it lived, the pain it endured, and the way in which it's life was taken. And with Beau, this taking of life stood out to me. Because I actually took part consciously, I made a choice to end his suffering, I spoke to him with love as I held him tight and prayed for strength as I said soothing words to him. I saw myself as doing the right thing to end his suffering.

And then I saw all the sentient lives I have played a role in taking unconsciously for many years of my life. I took life unconsciously, with no feelings of remorse, no struggle, no prayer. I did not speak lovingly and pray as I killed spiders that were less than 100 times my own size, I simply took their life out of fear. I did not speak lovingly to the ants as I took their lives. I did not even give a second thought, or a first one for that matter for how the many animals I have eaten with no concern at all for how they had lived and how they were murdered. I honestly had no feelings about these murders when they occurred. It was simply the consciousnesses I embodied. The food chain mentality. The consciousness that said that my life was more valuable than others, be it for my own survival, for my own safety, for my own peace of mind or my own ignorant indifference.

I saw the energy that I contributed to the global consciousness in each instance. It was the energy of fear. I cried more, and the birds eased their yelling to a soft song, a healing song as I prayed for forgiveness and forgave myself. Then I was shown a time I chose life over death. I found a rather large spider in the closet of my RV. It was a pretty scary looking spider and had made it's home in my closet. I had come to a place on my healing journey where I had began to understand my role in it all. A place where I held life more sacred than before. And despite my fears I chose to help this spider find a new home outside of my own home. I was so scared as I sat on my bed looking at this spider for some time. I saw her beautiful web and began to admire the magic of her ability to create such a beautiful design. I noticed the different colors on her small and fragile body.  My fear began to subside as I sat looking at her, admiring all the things about her that I failed to see in all the spiders I had killed in the past, blinded by my fears. I courageously chose love, and I spoke to her lovingly as I grew closer with a container in my hand, assuring her I meant no harm. Here I was, talking to a spider, and while I doubted that she would even hear me, or understand me, I spoke with love still.

I was shown the energy that I put into the global consciousness when I chose to save a life rather than end it. This energy was so much bigger than the energy I contributed when I took lives. The energy of taking lives was dark, it was distorted. It had nothing on the energy of saving lives. As I saw the energy of saving lives I breathed in deeply and felt an all encompassing sensation of pure, divine love. I was being shown the power of saving lives, all life. I was being shown the power of love over fear. This energy of saving life was so bright, so divine, there was no distortion in it, and it spread so quickly, so vastly into the whole of consciousness. I was being shown the power of love energy. I was shown my own energy body after I placed that spider on a branch in the yard, my energy had shifted, had cleared so much fear from my own field. I was shown the changes that took place within and without myself with my decision to face fear and embrace love. I cried more, my tears were tears of understanding, of wisdom, of joy for what I can do, how I can help.

We look at the lives of others who we do not know, who we have been taught to fear like we look at spiders, ants, and the animals we eat. We are either justified, or we have no care at all for the life of others who are not held valuable to us, who are different than us. Those outside our families, our circles, our race, our beliefs are too often seen as a threat, their suffering discounted. We do not recognize the suffering of others, all the murders being committed on our behalf, so that we can keep our convenient lifestyles. I have taken part in human suffering and murder as well. I have wore precious medals that were minded by children in third world countries, purchased items made in factories of slave labor. I have ignored the devastation and destruction of the planet for most my life, I have littered, I have wasted. I have played a role in it all. I am responsible.

I could sit and ignorantly look at the devastation of the tragedy in Manchester and say to myself, how could anyone be so heartless?! Tell myself that the world is an unsafe place and take no responsibility in my part in who we are, take no part in who we can become if only we look within and own our part, get honest with ourselves about our own level of consciousnesses that devalues life on a daily basis for our own gain, our own security, our own convenience.

I say the word ignorant with knowing what it truly means. For it is ignorant to form an opinion without all things considered, especially without considering where my own responsibility contributes to the state of the world that I wish to see change. It is ignorant to pray for this change and do nothing to be a part of it myself. It is ignorant to believe that I am a victim in this world that is ran by fear and hate, when I do not look at my own fear, my own hate. It is ignorant to dismiss my part, forgoing the opportunity to forgive myself through the love of the Creator that flows through me, as me allowing me to offer healing forgiveness to the world.

I have come to learn that within me, exists all things. For every single thing I see out there in the world, it is all within me as well, It is within me to heal it all too. For each of us that heals what is in us, the world is healed. I have learned that embracing fear leads to hopelessness, to powerlessness and returns to me, more to fear. I have learned that indifference leads to heartlessness, to numbness and returns to me, the indifference I have given to the world. How can I scream at those in my life who do not come to my side when I suffer, if I myself have not acknowledged the suffering of the world and worked to eradicate it through all the power I hold within to do so, by owning my part and doing my part to change. I have come to know that all my thoughts, my words, my actions are part of creating the world I live in, that I am a part of the problem or a part of the solution, there is no middle ground where I am not a part. I am co-creating the world I live in. I am responsible. 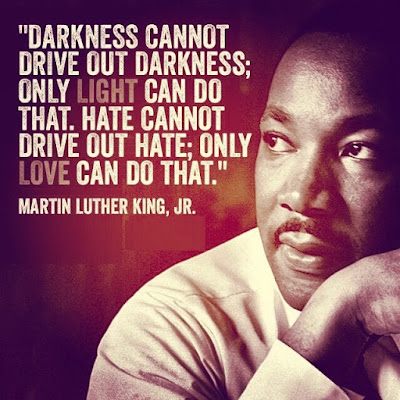 I have come to know a deep truth. The truth that I am powerful to change the world. We all are. And it begins within myself, within us all. I am learning to live inside out, more and more each day recognizing the truth that it all begins within us, the world exists within us all. Our level of consciousness is reflected without. What we see in the world is what we have created within ourselves. At first it was hard to understand this, Taking responsibility for the worlds problems felt so overwhelming. How could I be to blame, I was a good person, I helped others most my life, didn't that make me a good person? I had to take away the word blame and replace it with responsibility. To blame myself is to embrace guilt that becomes shame and it feels better to point the finger in blame outside of myself than to take blame. To take responsibility empowers me to embrace forgiveness and become the healing change, it allows me to stop pointing fingers to avoid feeling pain. Allows me walk in grace and offer healing, loving compassion to others because I have acknowledged what is in me, and my part in what we have created this far. It allows me to expand my own consciousness through forgiveness and love and generate energy that is so powerful, to become a catalyst for change. This power is in us all, every single one of us. 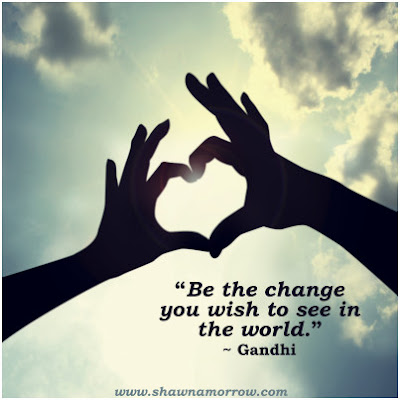